Joel Bakan: The Corporation; The pathological pursuit of profit and power 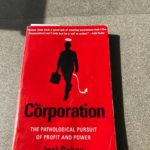 The corporation is an institution – a unique structure and set of imperatives that direct actions of people within it. It is also a legal institution. Bakan is claiming that corporation is pathological institution, since it only pursues its own self-interests, no matter what consequences will be.

Main breakthrough corporation achieved in development of business cooperation is separation of ownership from management and separation of personal responsibilities of owners beyond assets of owned object (limited liability that was introduced in 19th century. Those two elements enable economic power of corporations, that was based on their ability to gather great amount of money from unlimited number of people.

In 1720 English parliament banned corporations (with Bubble Act) based on experience with South Sea Company. This company was a scam from beginning, claiming it will have exclusive trade with South America. Claiming that without having agreement with King of Spain.

Americans have their own problems with Enron and alike and introduce Sarbanes-Oxley Act in 2002. With industrial revolution, demand for capital was huge. Development of industries and infrastructure was expensive. Corporations started to grow in 18th and especially in 19th century (England in 1856). Not only in America, even England repeal its Buble Act in 1825. Railways were the main playing field. But real transformation of the corporation started from 1890s when New Jersey and Delaware started to remove restrictions from their corporate laws. Three important subjects were: limitation of corporation to own stocks in other corporations that was removed, looser controls on mergers and acquisitions and repeal of rule that corporations should be establish only for defined purposes and for limited period and location.

With other states following legislation adaption, corporation started to consolidate from 1800 in 1898 to 157 in 1904. Shareholders disappear from the corporations they owned. And so, the law had to find someone else, some other person, to assume the legal rights and duties firms needed to operate in the economy. That “person” turned out to be the corporation itself. They were able conduct business in its own name, acquire assets, employ workers, pay taxes and got to court to asserts its rights and defend its actions. But with that theory that government grant corporations right was under stress, since more and more pressure was on legal bodies that “as pa person”, corporations should be protected as well as humans. In Amerika that led to Supreme Court ruling in 1886 that they should be protected under Fourteenth Amendment’s right to “due process of law” and “equal protection of the laws”.

People started to see growth in power of corporation and because of that fear that they may become more powerful than government and society was present. As response corporations started to work on their image. AT&T in 1909 run first brand awareness campaign. Others follow. Paul W. Litchfeld, CEO of Goodyear, was one of the leaders working heavily on corporate social responsibility. But regulation still was strong and government control that was establish after Great Depression. This changed in 1973, when creation of OPEC, created shock to economy and government inability to tackle crisis come under attack and neoliberalism took over with main actors like Roland Regan and Margareth Thatcher, that take power away from government ad back to corporations. But with improved transportation, technology and communication that power grow and so was potential for mobility of corporations. Power of international organizations was used to cut down barriers across the world. One of such organization is WTO that is seriously putting constraints on government abilities to fight corporations.

Corporate branding is important today. Social responsibility is one of the key messages in building that brand. Idea that corporations should be responsible to society as whole and not only to shareholders is being very attractive. Capitalism with a conscience. Friedman believes on the other hand that corporation is a property of stockholders and that it should have their interests in mind. Similar views were defended by Drucker, Chomsky and Debora Spar, HBS professor. Henry Ford learned a legal lesson on corporate responsibility, when Dodge brother took him to court and win, when he diverted dividends from shareholder (Dodges were one of them) and gave money to customers. This principle is called “the best interest of the corporation”. Corporate social responsibility is thus illegal – at least when it is genuine. So, todays corporation can work legally if, according to Friedman, they behave socially responsible in the service of corporate self-interest. Pfizer and BP are companies, where their CEO are pursuing strong socially responsible approach, but even they are doing it to a limit that is still available in order for them to do right things, that are also good for their companies. CEO cannot afford to act on his/hers values if they don’t also improve bottom line. This is why it is useful for them to be able to compartmentalize, to act as one person at home and in service of corporation when they go to work. Dr. Robert Hare views corporation as irresponsible, they relate to others superficially. Their whole goal is to present themselves to the public in a way that is appealing to the public (but) in fact may not be representative of what the organization is really like.[1] Social responsibility could be for corporations what charm is for psychopaths. Like case of Enron, this behavior is not very isolated case, but rathe symptom of the corporation’s flawed institutional character.

Cost benefit calculation is building stone of any corporate decision making, but what is cost benefit analysis include price of human life. That was a case of young women going to court with GM and won based on internal calculation that showed that putting a fuel tank too close to end bumper of car saved GM 9 USD per car and only cost potential 3 USD in liabilities.

Corporation is externalizing machine. It externalizes its costs, not caring who will pay them as long as it is not it. Externallies are cost that third person is bearing not having any word in accepting them.

The corporation’s unique structure is largely to blame for the fact that illegalities are endemic in the corporate world. By design, the corporate form generally protects the human begins who own and run corporation from legal liability, leaving the corporation, a “person” with a psychopathic contempt for legal constraints, the main target of criminal prosecution. If executives are not found directly responsible, in a sense that they planned illegal actions themselves, they are almost always not guilty of any wrongdoings. For a corporation, compliance with law, like everything else, is a matter of costs and benefits.

Corporations are fighting against obstacles in their quest for better performance. One of them is regulation. Using lobbying, PR and political contribution, corporations are trying to minimize regulation. Already in 1934, group of bankers and corporate executives tried to overthrow president Roosevelt. The idea was that some elements in army (veterans) will take down White House and set Smedley Darlington Butler as president, similar to what was going on in Germany. Corporate world in America was not all opposed to the idea of Fascism, especially under influence of Roosevelt limitations he put on corporate behavior. GM and IBM both had worked with companies in Germany and their trucks and machines were used in Germany war efforts.

There are too most used approaches to deregulation. One is to decrease amount to organizations responsible for enforcement of regulation and second one is repeal of regulation (when laws are being scaled back or even disappearing). For corporations to remove regulations, that reduce their profits, is a good business practice. The job of corporate executives is not to protect democracy, but to manage its uncertainties and avoid the obstacles it presents.

Corporations over the last century and a half, have sought and gain rights to exploit most of the world’s natural resources and almost all areas of human endeavor. The only area where corporation control is still not total, is public sphere. The twentieth century was unique in modern history for the widely held belief that democracy required governments to protect citizen’s social rights and meet their fundamental needs. Process of privatization and commercialization is now threatening public sphere independency from corporations. The biggest issue in corporate infiltration, is its infiltration to education system and marketing stress they put on children.

As mentioned, development in last century was that from Great Depression on until 1970s, government were successful in protecting people toward actions of corporations, but after 1970s pressure from corporate world brought power back to corporations. History always seems to find a way to stop domination of main institutions of certain period – church, the monarchy, Great Empires. Will it be the same with the corporation?

In democracy at least on general level, each person is equal. One vote is one vote, no matter who is voting. But if we leave decision power to market, then one dollar is sometimes fighting against more than one dollar. And that is why some questions should not be left for market to decide on them. Consumers still don’t have enough power to reward socially responsible behavior and enough information to know which companies behave properly, which don’t and which only pretend that they do. So that is a reason why regulation is still very much needed. Regulations are designed to force corporations to internalize (pay for) costs they would otherwise externalize onto society and the environment.

The state is the only institution in the world that can bring a corporation to life. Without the state the corporation is nothing. Important question is never whether the state regulates corporations (it always does), but how and in whose interests, it does so. Public good should be the final goal of corporation and government should have a power to regulate it into that direction. Government, at least in America has a right to terminate a corporation (Charter revocation laws) if it doesn’t behave in public interest. Author believes that the corporation is not an independent “person” with its own rights, needs and desires that regulators must respect. It is a state-created tool for advancing social and economic policy. Author believes that we should establish better control over corporations with: better regulation, strengthening of political democracy, improving robustness of public sphere and challenging the international neoliberalism.

Corporation, corporation as a person, government, institution, Joel Bakan, limited liability, regulation
You may also like

Dr. Mark Powell & Jonathan Gifford: Machiavellian Intelligence; How to survive and rise in the modern corporation
About Post Author