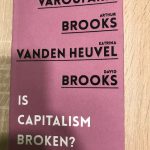 We need to do something different; this is not working. Now it might be capitalism 3.0, it might be social democracy, it might be democratic socialism. Even corporate chieftains like Ray Dalio and Marc Benioff are talking about problems of predatory, extractive capitalism.

You have a lot of corporate executives questioning the primacy of shareholder value; we should think about stakeholder value too. Capital should be moving at slower rates in order to be more productive.

We should always be critical of the world we live in.

There is no money in economic models of capitalism, there is no debt and there is no time – because if you introduce time, the mathematics is simply unsolvable. We live in the great failure of 1971. Do you remember when Richard Nixon proclaimed the end of the Bretton Woods system? That was the end of the twenty-year golden age of capitalism. In the EU there’s been a frantic effort to replace Bretton Woods, with the fixed-exchange-rate regime that led to the euro, which then led to a massive crisis.

What we now have is a gigantic concentration of market power in very, very few corporations and in the very few shadowy financial firms that control the corporation.

China proves that there is no association between capitalism and democracy. Capitalism creates not just wealth, but also crisis that undermine its own sustainability.

There is no such thing as a natural order of things in human society. Technological innovations will make sure that there will be no reason to have corporations.

Since 1970, four fifths of starvation-level poverty had been eradicated. Reason was globalization, free trade and the spread of property rights and the role of law and the culture of entrepreneurship.

I don’t think capitalism is the only thing that you need. You need rules, you need morals, you need regulations.

Consumption inequality, which measures how much we consume, is dead flat. The thing, that concerns AB is opportunity inequality.

Problem of redistribution is not that it is needed but that a government is bad at it.

The idea that capitalism is uniquely responsible for poisoning the planet is not an argument that holds water.

Change has to be incremental and slow, but constant. In 1982, there was 48 percent of the world that was living in the extreme poverty on under two dollars a day. Now that’s down to 12 percent. It’s not because we got better at planning; it’s because China and India and parts of Africa moved in a free-market society.

The Future of Capitalism

Capitalism’s defenders feel that blaming the capitalist systems for society’s problems is the moral panic of our time.

YB: When asked who is the worst enemy of capitalism, I never respond by pointing to the Left. We leftist are a bunch of losers. We have a tendency to fall prey to authoritarianism. The problem with capitalism at the moment is that it is seriously undermining itself and so becomes its own worst enemy. The really existing capitalism that we live in has a lot more to do with Chinese Communist Party than Adam Smith.

AB: Two billion of my brother and sisters had been pulled out of poverty since I was a young child. Five forces that did this are: globalization, free trade, property rights, the rule of law and the culture of entrepreneurship.

KVH: There are three major ways U.S. capitalism is broken: it is fueling extreme inequality; it is consuming democracy and it is destroying nature. Next system should not be only tweak of capitalism but redesign of basic institutions and functions – from ownership, banking, finance and resources. There should be individual freedom, private enterprises, vibrant small businesses protected from monopoly power. Banking and financial system should support patient investment.

DB: Capitalism is really good at doing something socialism is really bad at – creating a learning process to help people figure stuff out. I am a Whig. First Whig hero was Alexander Hamilton. He said we needed to create a broader and fairer capitalism. He created credit markets to do that. Next hero is Abraham Lincoln, he supported education. And the final hero was Teddy Roosevelt.

YB: Capitalism can’t evolve on its own, because financial system is broken and because we have a remarkable disconnect between the capacity of our technologies to produce wealth and the capacity of societies to absorb the product of the machine.

YB: Imagine a market society, a liberal democratic market society without a stock exchange. One share and one vote. We have no private banks if a central bank can provide you with a digital bank account.

AB: How do you pay for ideas Yanis mentioned. Capitalism does.

AB: Capitalism, socialism, any “-ism” is a structure, that’s not inherently moral or immoral. People are moral. We have hearts, we have brains. Morals have to come before market.

DB: You can go to Scandinavia if you want to make the social democratic case. They have a high social support. They also have no wealth tax. They have no inheritance taxes. They don’t have minimum wage laws in most of those countries. They have a very free economy.

KVH: The corporation needs to be rethought, as Yanis said. I began to quote the corporate leaders who understand how cancerous this shareholder primacy is to the future of the corporations.

YV: We live in a world where 18 trillion USD is in a negative interest-rate territory? That means capitalism is kaput. It’s happening because, we have the highest level of liquidity savings and idle cash that is doing bugger all – and the lowest level of investment in the environment and in good-quality jobs around the world.

DB: If you want to say capitalism should be your world view and your philosophy and your moral creed, I say you’re going to be a selfish bastard.

YV: Imagine a situation where the central bank effectively gives everyone a bank account and digital tools by which to transfer money across the world, using blockchain, without needing to rely on private bankers for the payment system. Imagine a situation where the state only taxes land and corporations that are socially owned. No income taxes. 97 % of money is minted by privateers.

KVH: I believe in freedom. But freedom is wrongly equated with the free-enterprise system as you describe it. The banks are more concentrated than ever. They are not building a shared-prosperity society.

DB: Global tax is the best way to unleash the creativity that none of us are smart enough to figure out on our own. It is all about knowledge. It’s all about how you make decisions.

YV: The problem is not that we have a small state. The problem is that we have a state that was always in the pocket of the ones who were creating the crisis. The only guarantee we have, the only weapon we have against concentrated power, is a combination of civil liberties – liberty at the personal level – with democracy. Aristotle’s definition of democracy. It is a system of government in which the poor govern because, by definition, the poor are in the majority.