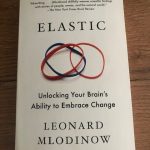 Today we consume, on average, a staggering 100.000 words of new information each day from various media. About 28.000 a few decades ago. There are new demands on how we must think in order to thrive in this whirlwind era. There are certain talents that can help us. The capacity to let go of comfortable ideas and become accustomed to ambiguity and contradiction; the capability to rise above conventional mind-sets and to reframe the questions we ask; the ability to abandon our ingrained assumptions and open ourselves to new paradigms; the propensity to rely on imagination as much as on logic and to generate and integrate a wide variety of ideas; and the willingness to experiment and be tolerant to failure. Author calls it elastic thinking.

Unlike analytical thinking, elastic thinking arises from what scientist call “bottom-up” processes. We can divide ways of thinking in three categories:

Analytical reasoning, like scripted processing, often fails to meet the challenges of novelty and change.

The brain has far more substructures than anyone had previously believed. Ninety-seven new brain regions, differentiated by both structure and function were defined in 2016 the NIH’s Human Connectome Project.

Psychological factors that are important for elastic thinking:

Neophilia together with reward dependency, harm avoidance and persistence are considered one of the four basic components of human temperament. We human tend to be attracted to both novelty and change. If we would not be afraid of negative consequences, this would be our mode of operation.

Gene that drives us to be disconnected with the status quo, to seek new and unfamiliar is called DRD4, for dopamine receptor gene D4. Dopamine carries signals for reward system, that initiates your feelings of pleasure. DRD4-7R variant of gene endow people with particularly high tendency to explore. People with this variant required more dopamine to get a rush.

Exploring in our personal lives is individual version of a corporation’s R&D. The amount we invest depends upon several factors like: degree of satisfaction with our current environment, our situation in life, degree of our innate propensity to seek the new.

The rational, risk avoiding part of a person’s brain doesn’t fully develop until about the age of twenty-five.

Karl Popper believed that all life is problem solving. Thinking is evaluating circumstances and making a meaningful response by generating ideas. Scripted information processing does not qualify as “thinking”. The first step in nurturing either analytical or elastic thinking is to nurture thinking – to become more conscious of when you employ automated scripts and to discard them when they don’t serve you well. Ellen Langer called that self-awareness wakefulness. Today psychologists call it mindfulness.

Logical thinking is best seen in mathematics. Mathematics is universal reasoning expressed in symbolic forms. George Boole create a way of expressing simple thoughts or statements that allows them to be written as equations that can be combined and operated upon. Charles Babbage tried to create a machine to implement that thinking. The main challenge in building AI is not how to implement linear application of rules and logic but the ability to generate new and original ideas.

Computers are symbol manipulators. Those symbols can be used to represent facts about the world. They can also represent rules that describe the relationships among those facts. And they represent rules governing how all the symbols may be manipulated. The technology of computers had changed since Boole and Babbage, but the concept hadn’t. No computer can create theories themselves.

The elastic thinking of the brain is non-algorithmic. We achieve our ideas without clear definition of the steps needed to get there.

Dopamine neurons are nerve cell factories that create dopamine and then use that neurotransmitter to send their signals to other nerve cells. They are located in substantia nigra.

The human brain’s “on” switch is internal. It is your reward system that provides the motivation to initiate or continue a chain of thought. A frontal lobe structure caller the orbitofrontal cortex is a part of brain’s reward system. If it is removed, we cannot experience conscious pleasure. That would leave us with no motivation to make choices or to formulate and attempt to achieve goals. Not being in touch with your feelings is different from not having any.

Emotions are evolutional mechanism for us to estimate positive or negative implications of events and circumstances. Herbert Simon coined two terms of decision-making strategies. Satisfiers and maximizers. First ones usually make first good decision they come out with; second ones are looking for the best one. We all want to make good choices, but research shows that making exhaustive analyses, paradoxically, doesn’t lead to more satisfaction.

Goal oriented activities bring satisfaction when goals are reached, but also during steps in the activities leading to the goal. Structures in brain that are used are nucleus accumbens and ventral tegmental area (VTA). Drive to goals is called grit.

Elastic thinking skills like pattern recognition, divergent thinking and imagination are inherently rewarding. That is also one of the reasons people do let’s say arts even if it doesn’t bring “hard” rewards. Sometimes monetizing creative output can disrupt the processes that lead to innovation.

The world inside your brain

Representation of the world is a concept created in our brain. Brain bottom-up approach of creating world representation is so superior that computer science is now trying to copy it for creation of AI. One of the tricks of brain how to do it, is to group diverse elements into a single compound unit.

Neuroscientist call the neurons in the networks that represent concepts: concepts cells or concept neurons. Concept networks are the building blocks of out thought process. Each of those networks can be accessed independently. The fact that neurons are shared among different networks seems to be the root of the associations we make between different concepts, for it allows the activation of one neural network to spread to another.

We have 86 billion neurons. Brain is divided into specialized regions. Prefrontal cortex is acting as brain’s executives. Our brains can operate in a top-down or bottom-up manner.

The Power of Your Point of View

Thomas Kuhn in his book The Structure of Scientific Revolutions define paradigm shifts as moments when framework of thinking is changed. To solve a problem inside existing framework, you need combination of analytical and elastic thinking, to envision new framework you need elastic thinking. People develop their point of view in first decades of life. Those who are open to personal paradigm shifts, are better equipped to take advantage in life.

Sometimes solving riddles in life is hard not because what we don’t know, but because of what we know or think we know, which disable us to see it differently, correctly. Creating new representations is difficult to automate but is often the key to successful problem-solving in the human world.

Culture is to a group what personality is to an individual. European culture, psychologist have found, stresses independence and literal thinking, while Japanese culture is more communal and stresses situation and context. A strong cultural identity, if it produces a deeply ingrained approach to problems, can make it more difficult to change that approach, even if it is not working.

Thinking When You’re Not Thinking

Ideas are produced in our unconscious minds. Quiet brains are not idle brains, that in periods of mental peace, our unconscious may be overflowing with activity. Known as the brain’s default mode of thought, it is a key mental process in elastic thinking.

Marcus Raichel defined “dark energy” of the brain as the energy of the brain’s default mode. It is kind of background energy. Nancy Andreasen was another person working on it. Defining it as the REST state. Random episodic silent thinking.

The associative processes of elastic thinking do not thrive when the conscious mind is in a focused state. A relaxed mind explores novel ideas, an occupied mind searches for the most familiar ideas.

The origin of insights

Roger Sperry was challenging ideas that two hemispheres of brain were not communicating in late 1950s. understanding hemispheric differences would later prove to be the key to understanding the origin of ideas like the sudden insights.

One of the amazing things about the human brain is that when we hear or read sentences, the appropriate meanings come to mind quickly and without conscious effort. But that’s only because we have a brain with an unconscious tuned to doing that.

Before an idea passes to your awareness, your brain conducts a kind of trial in which it considers all the evidence for the various meanings of your unconscious mind has produced. Only then does it pass your consciousness what it has deemed to be its best guess.

John Kounios and Mark Beeman were looking at them and where things happen when we create insights. They realized that the process is very similar to the process of understanding language, with similar division of labor between left and right hemisphere. Each hemisphere battles to get their idea accepted, a judge is strange structure called ACC – anterior cingulate cortex.

Increasing your degree of mindfulness is a good way to encourage insights, but it isn’t the only way. You can also cultivate insight by adjusting your external conditions. Being able to think without any kind of time pressure is also beneficial for generating insight.

How Thought Freezes Over

In life, once on a path, we tend to follow it, for better or worse. In the psychologists’ definition, functional fixedness refers to how our usual modes of thought can constrain the breadth of our new ideas in the context of tool use.

Hannah Arendt defined “frozen thoughts” as deeply held ideas and principles that we long ago developed and no longer question. The military is particularly vulnerable to frozen thinking because, in the military, experts and authoritative thought is institutionalized. Weak commanders look for prepackaged answers, strong leaders adapt. Another definition of frozen thinking is dogmatic cognition. The tendency to process information in a manner that reinforces the individual’s prior opinion.

Clarence Saunders thinking outside the box lead revolution in grocery stores to move products from behind the counter into area where customers could pick them by themselves.

If we want to pursue creativity, we need to let go of filters. We need to adjust for failures. Today’s social media is the enemy of creativity. Children have their elastic thinking on a higher level than adults, since their “executive structures” are not fully developed yet. Like Ursula K. Le Gun said, creative adult is the child who has survived.

The Good, the Mad and the Odd

There is a thin line between being crazy and very good at elastic thinking. The bizarre and the brilliant often have the same source.

Some substances are known to influence brain’s ability of filter usage.

Our brains are information-processors and problem-solving machines and certainly our analytical skills are crucial in meeting challenges we face. But even more important today is the magic of elastic thinking, which can generate new, often wild ideas.