Home > Digitalizacija > Tom Goodwin: Digital Darwinism; Survival of the fittest in the age of business disruption

Tom Goodwin: Digital Darwinism; Survival of the fittest in the age of business disruption 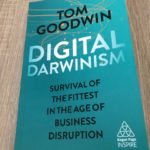 Many companies would wish they could start from somewhere else, when they are facing decisions how to cope with changes in business environment. Human beings are designed to live in a world that is local and linear. So are the companies. But the pace of change has increased and change is now global and exponential.

One hard question for every business today should be, what would your business look like, if it was created today? Most companies are like the UK tax code or Heathrow Airport. They are the aggregation of countless alterations, additions, patches and workarounds that have accumulated over years. Each incremental change is based on sound thinking and the realities of each moment and each one allows the business to just about work. Yet the UK tax code is 17.000 pages long; Heathrow is a mess and in the wrong place. Both would be far better if they could be started again.

Legacy issues are everywhere and with change of technologies and business models, old infrastructure looks like the wrong thing.

We tend to patch things up, rather than change, replace them. Self-disruption is risky, but it is also owning your own future, before it is too late. Your biggest risk isn’t occasional failure; it’s sustained mediocrity.[1] Innovation today is more about PR then real change. Gap between what is known to be required and what is done is huge.

Today it is not only pace of change that is problematic for business, it is also unpredictability. So, companies should find a way how to work in environment of such uncertainty. The biggest change that companies should embrace is focusing on consumer needs and not too much on their business practices. Big changes and not incremental steps are for those who are bold enough to re-imagine what they do and for those who are working around modern customer needs. Digital Darwinism idea that companies can optimize and develop over time with slow but consistent steps is not enough anymore. That means that new leadership styles are also needed.

Today it is not enough to be agile, but in order to be able to grasp and live with a change, you need to be predictive. It’s the paradox of transformative potential vs actual change that should concern everyone in any business today.

The world hasn’t changed as much as we like to think it has. In particular we’ve failed to really understand the power of digital. If we are looking into history, we can see how deployment of new technologies like transition from water to steam power and then to electricity, was always done in a way that technology was known for some time, but utilization usually came in small steps or it was based on implementation in new environments. Transition from line production to group production is an example of such transition. When instead of full implementation of power of electricity, factories did small adjustment, that brought better utilization and they were contend with it. Seeing electricity only as energy source, failed to quickly bring companies secondary benefits that revolutionize lifestyle and open the door for new products and services.

When companies look to undertake changes, they should be aware that transformational change is very hard to predict. Changes need to come from the core and not the edge. Teams need diverse talents, also dreamers and thinkers who could see second and third-order changes.

Business owners tell themselves lies all the time to feel comfortable. Amara Law states that people often overestimate the amount of change over the short term and underestimate it over the long term. But sometimes they also underestimate the dept to which the most meaningful technology needs to be applied. First, we shape our tools, then they shape us.

Transition to digital started with trying to put real world things into digital form. Skeuomorphism, the design concept of making digital items resemble their real-world counterparts, was a way to aid the transition into the new era. During 1973 and 2002, a lot of investment went into hardware and software, but transition was not full. The role of IT went from job of the future to a support function; maintaining not building.

Today we are in the peak complexity. We are in the mid-digital age. We take thinking of the past, and cram it into containers of the future, where it just doesn’t fit. Disruptive forces, the vast feeling of change, the acceleration of complexity, the stress of companies fighting for the profit margins of the past is where we now live. We are still thinking in terms of offline world and try to implement online approaches to offline world.

The amount of data we now access has grown far faster than the general level of data literacy in companies. Since data are becoming important for decision making, we should take care of using it correctly. This can be concern, since data is never objective; it reflects the agenda of those who collected it, filtered it and present it. Data often represents what is most easy to measure, not what matters the most.

Author is not agreeing with Clay Christensen idea of disruption coming from companies that use new technologies to enter market with inferior but cheaper products and then slowly taking higher end market too. For him companies should focus also on doing new and better things, not only be concerned with competition from bellow. He is more prone to Thomas Kuhn approach of paradigm shift, when changes actually happen, when existing paradigm is replaced with new proofs and new framework. His theory of disruption is based on idea that companies don’t go against category norms; they just base their approach on brand new thinking and change the parameters that fixed the design process.

Technology and design make radical progress, which then slows to find an optimal device, followed by huge leap to another way of thinking.

We seek change that is fast, easy and tangible, more than stuff that makes a difference. One of the changes that you can do as a company for example is rethinking your customer relationship management (CRM) strategy and data architecture to manage customers over the long term. Depth of changes is important, digital transformation is about building with technology at the core and digitalization is just adding some tech on the edge to modernize the system. When we look on a business-like structure of layers (something like onion), you can see that:

Value is different in digital age.

Accounting procedures killed innovation. Big companies are about continuous improvements. They rather wait for startups to do hard work and then buy them. Reality is that many leaders and CEO’s don’t want to change. Many CEO’s are not looking to build their career, they try to round it off. Today companies are shaped by short term share values. News must be managed, risk must be avoided, balance sheet must be guarded.

Strong leaders give the teams and company confidence to manage timelines the best way: sometimes it’s the need to be fast and decisive and other times it’s about waiting for the right moment. If you want to be successful avoid bureaucracy and celebrate failure. We need to accept imperfection. We need to get way better at being comfortable with being uncomfortable, with hating consensus and loving chaos and energy.

We should create a culture where innovation is part of all jobs, not compartmentalize it. IT is seen as support function, but it should be an investment vehicle for leading a path through change.

Every company needs to seek out what their competitors wish they had and really focus on that point of difference.

We live in a world of too much stuff and too little time and three things that are apparent and you should take care of them in this world are:

Today it is all about simplicity. It is not about items any more, but about systems, solutions. People went from being sold to buying. Today it is about experience of people, not channels that make it happen. Online is not something we need to go on, it is always on. Geolocation is another example of pervasiveness. Data can help with personalization and relevant marketing. Instant messaging is one of the technologies that is growing fast.

Author is concern about the degree to which technology-led and data-driven people and culture seem to “own” the idea of predictions. Companies should collectively start to look ahead in the future. They should become better at future planning. We need to understand long-term human transformative changes. Change is mainly about humans. We are driven to want to tell the world who we are, to form social bonds, to procreate, survive, and to have shelter, food and safety in order to do that. Brands and companies built on those tenents of life will do well.

In the internet development, we had three eras and are now going into fourth:

Computing becomes personalized, assistive and predictive. Privacy is probably a concept that will change a lot. Increasingly life is not about coincidence, it’s about algorithms. World is not getting more connected, rather it becomes ground for extremism. Sometimes there is a feeling that middle class role is diminishing.

Education is important, but is it really important to teach kids knowledge that will be obsolete by the time they started career. We are living in the world where we outsource knowledge and skills to internet. Maybe reasoning is more important than memorizing. Author believes that there are six key attributes to develop:

Companies should be diverse in their talent. Friction is useful for progress. Disagreement is the energy that drives creativity. Creativity comes from constraints, from people using ingenuity not power, thinking not construction, from people having to make something worth talking about, not paying people to spread the word.

If you really want to restructure your business around new technologies, you should:

Simplicity is not simple. Saying yes to the right things is the real skill. We should make things people want rather than making people want things.[2] 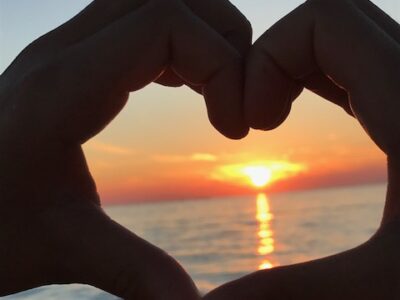 Making a consumer into the customer 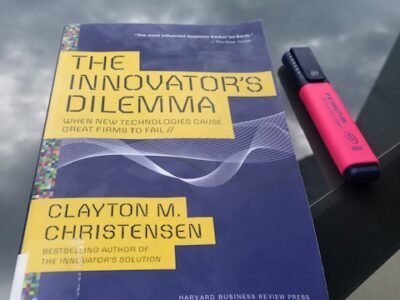