Home > Poslovno svetovanje > Izkušnje > Annie Duke: Thinking in Bets; Making Smarter Decisions When You Don’t Have All the Facts

Annie Duke: Thinking in Bets; Making Smarter Decisions When You Don’t Have All the Facts 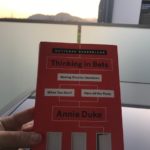 Bet is really a decision about uncertain future. There are exactly two things that determine how our lives turn out: the quality of our decisions and luck. Learning to recognize the difference between the two is what thinking in bets is all about. Sometimes good-quality decision got a bad result. We have a tendency to equate the quality of a decision with the quality of its outcome. Poker players have a word for that: resulting.

Hindsight bias is a tendency, after an outcome is known, to see the outcome as having been inevitable. We are uncomfortable with the idea that luck plays significant role in our lives. Creating order out of chaos has been necessary for our survival. Finding predictable connections is, literally, how our species survived.

When we work backward from results to figure out why those things happened, we are susceptible to a variety of cognitive traps, like assuming causation when there is only correlation, or cherry-picking data to confirm the narrative we prefer.

When asked about theory of games in comparison to chess, by London taxi driver, John von Neumann replied that chess is well-defined form of computation, even if you are not able to find it, in theory there is a solution, a right procedure in any position. But this kind of games are not real games. Real games consist of bluffing, little tactics of deception, asking yourself what other guy thinks I will do. Real life, like games, is much more like poker. So is business and sales. They both involve uncertainty, risk and occasional deception. Problem arise if we threat life, business and sales decisions, as if they were chess decisions.

Incomplete information poses a challenge not just for split-second decision-making, but also for learning from past decisions. Von Neumann and Morgenstern understood that the world doesn’t easily reveal the objective truth.

We should use uncertainty to our advantage. What makes a decision great is not that it has a great outcome. A great decision is the result of a good process, and that process must include an attempt to accurately represent our own state of knowledge. That state of knowledge, in turn, is some variation of »I’m not sure. « I am not sure is simply a more accurate representation of the world. When we accept that we can’t be sure, we are less likely to fall into the trap of black-and-white thinking.

The world is a pretty random place. The influence of luck makes it impossible to predict exactly how things will turn out, and all the hidden information makes it worse. Being wrong hurts us more than being right feels good. So, we by default we assume worst case scenario.

By treating decisions as bets, poker players explicitly recognize that they are deciding on alternative futures, each with benefits and risks. If we can find ways to become more comfortable with uncertainty, we can see the world more accurately and be better for it.

Part of life skills comes from learning to be a better belief calibrator, using experience and information to more objectively update our beliefs to more accurately represent the world.

People are credulous creatures who find it very easy to believe and very difficult to doubt. Under pressure we believe that statements are true. This is from our evolutionary push toward efficiency rather than accuracy. Even though our default is “true”, if we were good at updating our beliefs on new information, our haphazard belief-formation process might cause relatively few problems. But usually we don’t do that. We instead of altering our beliefs to fit new information, we alter our interpretation of that information to fit our beliefs. How we form beliefs, and our inflexibility about changing our beliefs, has serious consequences because we bet on those beliefs. Sometimes even if people are aware of their biases, they are not better able to overcome them.

Incorporating percentages of ranges of alternative into expression of our beliefs means that our personal narrative no longer hinges on whether we were wrong or right but on how well we incorporate new information to adjust the estimate of how accurate our beliefs are. There is no sin in finding out there is evidence that contradicts what we believe. The only sin is in not using that evidence as objectively as possible to refine that belief going forward.

Acknowledging that decision are bets based on our beliefs, getting comfortable with uncertainty, and redefining right and wrong are integral to a good overall approach to decision-making.

Aldous Huxley recognized: »Experience is not what happens to a man; it is what a man does with what happens to him. « There is a big difference between getting experience and becoming an expert. We have the opportunity to learn from the way the future unfolds to improve our beliefs and decision going forward. The more evidence we get from experience, the less uncertainty we have about our beliefs and choices. Ideally, our beliefs and our bets improve with time as we learn from experience. But ideally is not what happen in real life. The unfolding future is a big data dump that we have to sort and interpret. And the world doesn’t connect the dots for us between outcomes and causes.

People are overconfident in them self. Again, this is part of evolution. People who are self-confident attract better mates, improving the chances their genes get passed on. Because we are good at detecting deception, to deceive others about our self-confidence, we had to first deceive ourselves. Self-serving bias is a deeply embedded and robust thinking pattern. When it comes to self-serving bias, we act as if our good outcomes are perfectly correlated to good skill and our bad outcomes are perfectly correlated to bad luck.

Black-and-white thinking, uncolored by the reality of uncertainty, is a driver of both motivated reasoning and self-serving.

When we think about others, we are rarely objective. We live in relative world and comparison is our main tool of estimation. Sonja Lyubomirsky explained that even if we think that happiness is about comfortable income, robust health, supportive marriage and lack of tragedy and trauma, it is actually about how we are doing comparatively.

We put our beliefs in 100 or 0 % categories. It is easy to win a bet against someone who takes extreme positions. Explicitly recognizing that the way we field an outcome is a bet, we consider a greater number of alternative causes more seriously that we otherwise would have. That is truth-seeking. Once we start actively training ourselves in testing alternative hypotheses and perspective taking, it becomes clear that outcomes are rarely 100% luck or 100% skill. We are in a better place when we don’t have to live at the edges. Euphoria or misery, with no choices in between, is not a very self-compassionate way to live.

Forming or joining a group where focus is on thinking in bets means modifying the usual social contract. Different friends fill different needs. A group can function to be better than the sum of the individuals, but it doesn’t automatically turn out that way. Philip Tetlock and Jennifer Lerner, leaders in the science of group interaction introduced a paper in 2002 where they define that group can improve thinking of individual decision-makers when the individuals are accountable to a group whose interest is in accuracy. Betting is a form of accountability to accuracy.

Groups should be diverse. John Stuart Mill was writing about that. In his essay On Liberty, he was talking a lot about importance of diversity of opinion. His insight is that on our own, we have just one viewpoint. That’s our limitation as humans. But if we take a bunch of people with that limitation and put them together in a group, we get exposed to diverse opinions, can test alternative hypotheses and mover toward accuracy. We already know why we’re right. What we need help with is why we are wrong. Diversity is the foundation of productive group decision-making, but we can’t underestimate how hard it is to maintain.

A growing number of businesses are, in fact, implementing betting markets to solve for the difficulties in getting and encouraging contrary opinions. Companies implementing prediction markets to test decisions include Google, Microsoft, GE, Eli Lilly, Pfizer and Siemens. People are more willing to offer their opinion when the goal is to win a bet rather than get along with people in a room.

Robert K. Merton was one of the most influential sociologists of 20th Century. He introduced scientific norms, known as CUDOS:

Data sharing in science happens when hypothesis is created. This is sharing by an agreement. So should the government share information, based on agreement with people.

Don’t shoot the messenger. The accuracy of the statement should be evaluated independent of its source.

Knowing how something turn out creates a conflict of interest that expresses itself as resulting. We treat outcomes as good signals for decision quality, as if we were playing chess. If the outcome is known, it will bias the assessment of the decision quality to align with the outcome quality.

True skepticism is consistent with good manners, civil discourse and friendly communications. Skepticism should be encouraged, and where possible, operationalized.

When we communicate in a way to maximize our ability to engage in truth-seeking, we should express uncertainty, lead with assent, ask for temporary agreement to engage in truth-seeking and focus on the future. When new information is presented, we should present it as supplementing rather than negating what has come before. Use “and” instead of “but”.

Philosophers agree that regret is one of the most intense emotions we feel, but they have argued about whether it is productive of useful. But if we can move regret before the decision is made, it can influence us to make better decisions and it helps us treat ourselves more compassionately after the fact.

Another approach is precommitments, that provide us with a stop-and-think moment before acting.

Being wrong is a conclusion, not a rationale. And it is not a particular accurate conclusion since, as we know, nearly nothing is 100% or 0%. 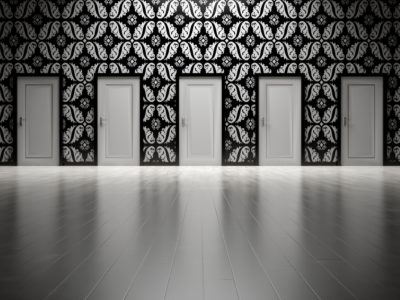 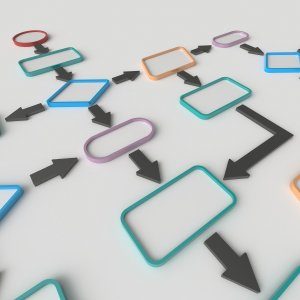